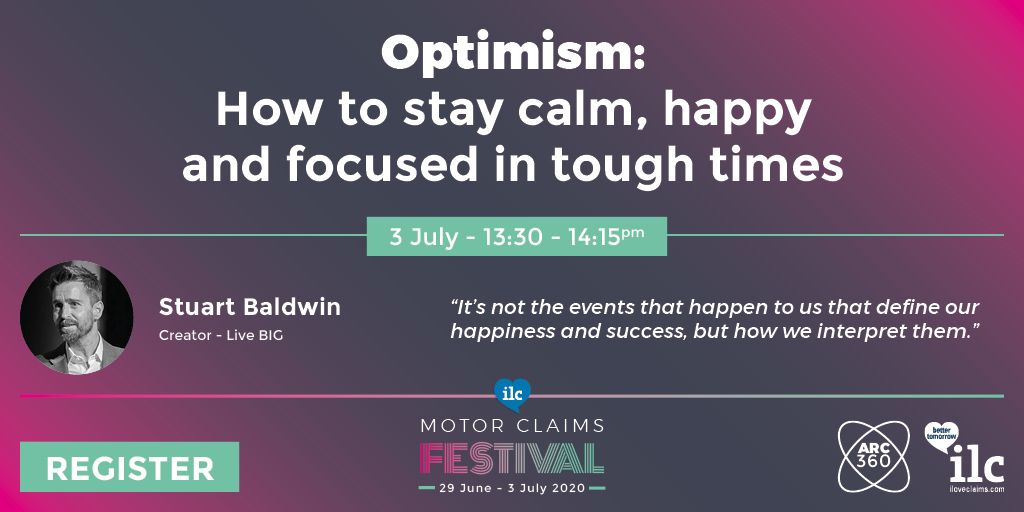 Businesses and individuals were reminded that ‘it’s all about mindset’ during the final session of the week-long I Love Claims digital Motor Claims Festival.

Hosted by Stuart Baldwin, creator of Live BIG and labelled by ILC founder, Chris Ashworth as the CEO of positivity, the session focused on optimism and how to stay calm, happy and focused in tough times.

‘Remember March?’ Stuart asked rhetorically on opening the session, ‘it seems like a long time ago right.’ He went on to recall how at the start of March he was about to head off for a major project in Zurich with Deloitte. The result was his engagement was cancelled.

‘By the end of that afternoon my entire diary was wiped out for the next four months,’ explained Stuart, ‘I was sat at home asking myself OK, what do I do now?’. The answer was soon to present itself and Stuart decided to share his insights into how the mind works via a series of webinars – the first being on optimism. He has since done a webinar every other week since.

‘It’s OK to accept how we feel, it’s how we interpret that and shift the focus to one of optimism that counts,’ explained Stuart. ‘Us human beings are very adaptable, we can change – it’s all about mindset.’

Stuart explained how Live BIG has been developed to empower leaders to get the best from themselves and their people. He explained how these were ‘filtered’ into three core areas: having the big idea, making it real and making it stick.

Stuart explained, ‘Optimism is probably the most important right now because its not the events that happen to us but how we interpret them. We think success drives happiness but that doesn’t work, it’s actually the other way round happiness drives success.’

Revealing some fascinating statistics in relation to optimism such as people are three times more creative, 31% more productive and have 39% better health.

Stuart said, ‘Optimism is a mindset skill. It’s our ability to accept it is what it is – that’s not to say it’s acceptable – but we’re saying it can’t be changed or controlled right now. That’s only the first part. The next step is to choose our mindset – what do we want to focus on.’

Stuart went on to reveal how an ‘accept and shift’ mindset ultimately defines optimism, and how what we focus on, we get.

‘Our brains notice the things we choose to focus on,’ said Stuart who highlighted the idea of change blindness with some video clips of people changing place without notice. ‘Our brains do not register things that are not important to us only what we are focused on.’

‘How we think, drives how we feel, which influences how we behave.’

Pointing to how it was important to accept that nothing could change the moment in time reality, Stuart said, ‘Accept the reality but don’t dwell or brood on it – especially now. Instead think what do I want because that is what I will get.’

As part of the session, Stuart got the audience to participate in an activity where has asked attendees to write down one problem, fear or worry they currently faced. He then took them through a step by step process – a skillset which requires practice – to interpret that specific issue into a more optimistic situation.

‘You can’t control the cards you’re dealt… just the way you play the hand,’ said Stuart, ‘Optimism is the belief that our actions will make a difference to our future – focus on a problem you are a victim, focus on an action and you feel empowered.’